Close Encounters of the Squirmy Kind 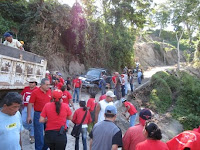 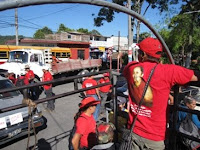 In November a couple of friends and I had the privilege of being invited to serve on a work crew in response to the floods. We worked in Las Animas, San Martín, clearing a road which had been blocked by a landslide.

The invitation came from friends in the mayor's office in Tonacatepeque, which teamed up with the mayor's office in San Martín to put this relief brigade together. It was part of a broad effort by municipalities which were less-affected by the rains to reach out to those who had suffered more, and, from my experience, was something the FMLN was coordinating throughout the country on those first weekends after the flooding.

The brigade was made up of community residents from throughout the area, and included about 50 people. We started out early in the morning, loading ourselves into trucks in Distrito, picking people up at a few stops, gathering more folks in Tonaca, and then making the big rendezvous at the mayor's office in San Martín. It felt like a big rally. Energy was high, red shirts were everywhere, friends greeted friends, candy was passed among truck mates.

We hit the dusty, bumpy road to the job site. Rushing water had caused a landslide to cover a road which was part of a switch-back up the hillside from the river down below. This road seemed to be the only access to a community on the other side of the river. The drive to the site was a little harrowing as the heavy trucks full of equipment and people slid on the loose dirt. As soon as we stopped, everybody hopped out, grabbed tools and got to work. It was so awesome to see grandmas working alongside big guys alongside the mayors' staff alongside a gringa and a couple of pastors.

The strategy was to clear the upper part of the switchback and to dump all of the debris down over the low side. It seemed like the lower part of the road was just going to be abandoned (a good idea, I think). I grabbed pick-axe and and started hacking away at the pile of rocks, roots, tree parts and dirt which filled the road. We developed a good rhythm, with the shovel folks scooping up the stuff we loosened up with the picks, and then the wheel-barrow guys hauling it away. I have never seen such hard-working women with pick-axes and shovels.

One of the challenges was the large amount of plant material tangled up in the dirt. We had to chop away at tree limbs and roots and then grab big piles of this stuff by hand and toss it over the other side. A pair of work gloves would have been a really good thing to have for this, but, spines and all, we just had to pick it up. My first encounter of the squirmy kind came as I picked up a big armload of trees and roots and spines and, from the far side of my pile, out plopped a big snake! I tossed my pile into the road and the lady next to me screamed, "¡culebra!" The big dude next to me, who had a shovel, identified the snake as a boa constrictor, and only about 5 feet long, so not too big. He held it up for me to get a photo, while the lady next to me told me that she almost peed her pants. Then, the culebra was released into the wild on the down-side of the hill so that it could go kill some rats and other bad things.

We picked up our tools and continued working. The woman next to me pick-axed with great enthusiasm and animation as she shared stories of boa constrictors attacking her chickens and having fights with her dog. I stopped picking up piles and used my pick to drag piles of debris across the road to dump them.

A little time passed and then, there it was! A second squirmy encounter, this time with a teeny weeny pink baby snake. I had no idea what kind of snake this was, but when the big dude came over with his shovel and started whacking it to death and chopping off its head, I had a clue that it might be a biter. The woman next to me explained that it was a baby coral snake and that even a baby bite could kill you and that she really almost peed her pants that time. The shovel guy scooped up the dead baby snake and tossed it over the side.

We picked up our tools and got back to work. Pick, pick, pick away at the hillside. Hack, hack, hack away at the roots. I took a big swing, and as a big pile of dirt fell away, a tail end of a snake was protruding out from a hole. It disappeared in an instant and then out shot the head of a snake which landed a short distance in front of me in the dirt. I screeched out, "EEK" (yes, apparently this is really what comes out of your mouth when you have a close encounter of the squirmy and dangerous kind), and slowly backed up. (OK, this is where watching PBS came in really handy - red next to yellow, you're a dead fellow, don't run from a coral snake). The big dude got busy quick and that snake was headless in no time. People gathered, because you do not hear a high-pitched gringa EEK every day of the week, and of course, we took a picture. 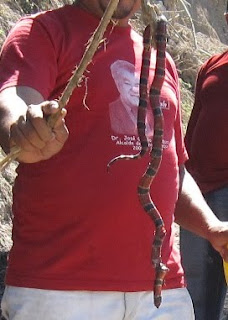 The woman next to me said, with a tone of finality, "We're done." Coral snakes come in pairs, and we were NOT going to encounter the other parent snake. It was time to rest. I got to hang out with a really interesting guy who gave me a nice history lesson about Salvadoran radio stations, especially from the time of the war. He was a fascinating guy!

By the time we took our places in the chow line, we were all out of water, and were plenty hot, dirty and tired. Yet, there was an energy and spirit of unity among the group. The simple act of standing in a line, waiting for tortillas and beans which were being served from the back of a pick-up truck, was enough to bring back memories of chow lines during the war. Stories and memories were shared. We ate with our dirty hands, sitting on the ground, and watched the big yellow earth movers come in to finish the road job. Now that the road was widened and the debris removed the earth mover could come in and carve out the hillside a bit more. The job was finished. The road was cleared.

Work gloves are now on the packing list, and, as my pastor friends will tell you, I am more than a little lucky.