A Day in the Life of a Beautiful Orange Toilet Brush? 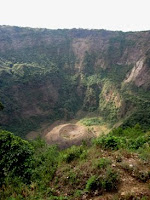 Sometimes it's really important to get away. Away from the city, away from the noise, away from the work, away from the needs. One of my favorite get-away spots near San Salvador is Parque El Boquerón. The park is beautifully planted with flowers and sculpted bushes, and the temperature is usually pleasant and cool.

I was there recently with a small group from the US and with a Salvadoran friend, who works so hard that he had never had time to visit the top of the San Salvador (or Quezaltepec) volcano before. Despite the fact that it was not pleasantly cool, it was pure joy to be present as our friend marveled at the view and crawled around on the ground to take pictures of the beautiful flowers.

We arrived in the late afternoon, and the gardeners were busy pruning and raking aw 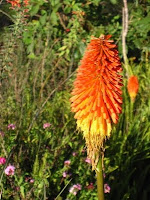 ay the debris of the dry season. We had been admiring admiring the flowers, especially a particularly striking orange variety, and like good North American paparazzi, were taking lots of photos. One of the gardeners, who had been watching our antics, kindly cut an orange flower and gave it to a member of our group. Because we are so knowledgeable about flowers, we aptly named it The Beautiful Orange Toilet Brush.

We walked along the rim of the crater, watching light clouds falling down over the rim. We talked about the history of the eruptions. Our friend told us that long ago the volcano had erupted and buried the ancient village of Nejapa (Nixapa) so that a new town was built in its current location. Every year this story is recalled on August 31st with Las Bolas de Fuego, a fireball-throwing event (which Tim's El Salvador Blog once featured). The most recent eruption was in 1917, when the lake inside the Boquerón crater evaporated and the small cinder cone was created. The volcano vented gas through some of its fissures through the 1970's, but has been sleeping since.

As we walked and talked, we received more than a few scrutinizing looks ... because, of course, we were carrying the beautiful orange toilet brush. There is really no good way to hide a gift like the toilet brush without crushing it, and we were the only ones who knew it was a gift. We did not want to be known as the gringos who picked flowers in the park, so we tried to be as discreet as possible, with an every now and then phrase "un regalo" - "a gift" tossed into the air.

The beautiful orange toilet brush survived the walk, graced our prayer circle in the shade of the pine trees, accompanied us on our ride down the volcano on the Quezaltepeque side, through the Nejapa short-cut to Apopa, and back to San Salvador. In the dark of the evening, the beautiful orange toilet brush was quietly placed into a vase on a small home altar. A candle has been burning there for a few months, in honor of a young man who was violently murdered. His photo, the candle, the flowers help this young man's family to remember him as son, husband and father. These small signs of life and light create a space for a communion of saints, across the boundaries of life and death.

The beautiful orange flower
a gift from the earth
a gift from a gardener
a reminder to get away sometimes to laugh and to crawl among the flowers.

God at Work History Off the Beaten Path