Off the Beaten Path - Teotepeque

April 20, 2010
Sometimes a group of international girls just wants to have an adventure. A little German, a little English, a little Spanish, a local friend with a pick-up truck, a full tank of gas and a free late afternoon - why not drive over to Teotepeque for a visit? We squeezed into the truck, which had to be pointed downhill and given a little push to get started, and headed west, through the department of La Libertad. It was sticky and hot near the coast. We passed by surfer dudes, fishing boats, beach shacks, a few resorts and a fish-processing plant. It was a dog-day afternoon. Seriously, every dog in La Libertad was out on the road for a stroll or a nap. 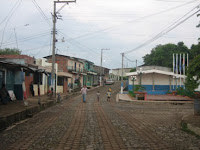 d north and headed up into the mountains, passed through a couple of tunnels, and up a steep dirt road, and finally arrived in downtown Teotepeque - a sleepy little town at the top of a mountain. The people in the area work in agriculture, mostly with coffee and balsam. The town folks mostly make their livings by selling the things which they grow or make in their homes. The newer buildings are block and the older ones and many homes are made of wood. 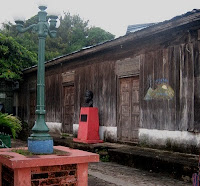 The name Teotepeque is Nahuat in origin, and means Mountain of God. The town is probably most famous for being the birthplace of Farabundo Martí. (Agustín Farabundo Martí Rodríguez was born on May 5, 1893, and is the man for whom the FMLN - the Farabundo Martí National Liberation Front - was named.) Martí grew up on a farm located below the town.

At the time I visited, the mayor of the municipality was from the ARENA party. This created a strange dynamic in the town, with exterior propaganda promoting ARENA, but the posters, hats and flags inside many 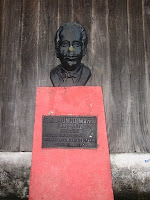 of the homes were of the FMLN. Probably most striking was the actual birthplace of Farabundo Martí, a humble wooden building with a statue of Farabundo out in front. The statue was missing its nose, and the building was abandoned. We were told that it once held a sewing school and cooperative, but that "there was a snake inside" - a reference to the local mayor. The small plaza in front of the building was surrounded by curbs of red, white and blue (ARENA colors).

We spent the early evening eating cookies and drinking coffee with a friend inside of her home, the walls of which were filled with pictures of Jesus and her family. Then we were back out 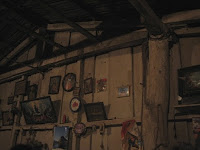 on the road, driving carefully through the tunnels. There seemed to be a lot of youth crouching or sitting along the road. I felt a little sad for them -- they just seemed to have nothing better to do.

We ended up taking the long way back to the city. We stopped for a quick bite along the way, and I gave my pastor friend back in San Salvador a call (thinking he might be worried). I told him, "I am on an adventure with the German girls." He said, "Of course you are."

I'm glad that I went on this little adventure. Sometimes we are so busy when in El Salvador that we don't get a chance to trek a little bit off of the beaten path. If any of my readers have been to Teotepeque recently, please share any updates.

History Off the Beaten Path