April 23, 2010
I have a very special friend. She is the kind of friend who is always true to herself and helps me to be true to myself. We are sisters in the Spirit.

During our first trip to El Salvador together, we dubbed ourselves "Greasy" and "Grubby." It was a very hot and humid time of year, and we spent some quality time living out in the campo, and, while our Salvadoran hosts always looked fresh and clean, we did not.

Ever since, we have lovingly referred to ourselves as Greasy and Grubby, and together, we have had, and continue to have, many adventures. Some are tales worth telling.

Some months later, we were on a plane. God was sending us for some purpose which we did not really know. We just trusted him, and trusted our Salvadoran partner pastor and community to show us the way. We had no concrete plans other than to live in our sister community and to visit families. Grubby spoke no Spanish. Greasy spoke some. We prayed our way through the flight, and were greeted at the Salvadoran airport by 80 friends who came on an old school bus to greet us!

We stayed in our sister church community, hosted and fed by different families. During the day, we visited families and listened to their stories. We learned that our sister pastor had also had a vision, and that he had been given a plan. He led us from home to home, and as we walked, listened and prayed, a circle of women formed, and a trail of children followed. The home visits became a movement of these faithful women and children, and our presence was the catalyst for story-telling. There was a lot of crying, a lot of hugging, and a lot of Spirit-given words of comfort.

One of the women in the circle was also our host near the end of our stay. Her family secretly told us that we would be there for her birthday. Would we like to help celebrate? Of course we would!!

The birthday evening arrived. As it got dark, one of the daughters of the house got out some plain, white candles to place around the house for a bit of light. She did this by lighting one candle and using it to melt the wax on the bottom of another so it would stick to the chair arm, the table, a wall. This stuck me as very practical yet something I would never do in my own house.

The surprise happened when the mariachis arrived! Not trumpet players like in Mexico, but Salvadoran musicians with different sizes of guitars and a marimba. These guys were awesome!

Did I forget to mention that Greasy had brought her guitar, and Grubby had brought her violin? Well, the invitation to join in the fun was made and so out came the instruments. Salvadoran musicians seem to have a realm of notes in between the notes that we use in the north, so even though we tuned ourselves up a bit, we were pretty terrible. But, it was absolutely FUN to make the noise joyfully and to celebrate.

Our hostess was in her mid fifties. It was the very first time she had ever had a birthday cake or a birthday party. The first time, in more than 50 years. What an amazing blessing for us to be a part of that. The music continued on into the night. At one point the grandma of the house (in her 70's) pulled me into her lap and would not let go. She just held onto me, maybe holding onto the moment of seeing her own daughter celebrating a birthday for the first time. Maybe it was her first party too. 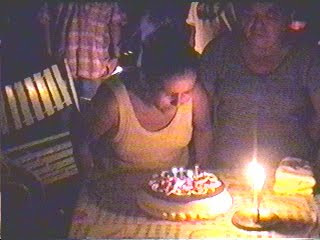 Culture Tales of Greasy and Grubby