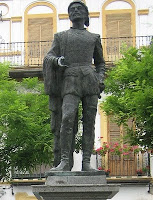 the beautiful formalities which is still practiced in many parts of El Salvador is the use of respectful titles for people: profesora Marta for the teacher, ingeniero Beto for the construction project manager, and el reverendo for the pastor. Women are often called niña María or niña Berta as a sign of endearment and respect. (Niña is usually translated as little girl.)

And then there is don Juan.

One day, Greasy and Grubby were on the lookout to find a good time to sneak out of their jammies and into their clothes for the day. This can be a difficult challenge when staying in a one-room home with plenty of men-folk around. It can be especially difficult when the home is the "hotbed of political action" and all the neighbor guys come over to have long conversations with the man of the house.

It was still before breakfast, and Greasy and Grubby were ready to seize the opportunity to quick-change as soon as the house was empty. They quickly jerked off their jammies and were struggling to yank dresses down over their heads. Of course, it was like a sauna in the house, and sometimes dresses are really hard to yank down over sticky heads and arms. In mid-stick Greasy jokingly said, "Just watch, now will be just the time when some Don Juan will walk in the door." At that very moment, we heard the lady of the house slowly call out, "Buenas días, don Juan."

Yank, yank, tug, pull - in a flurry of flailing arms the dresses were down just in the nick of time.

I remember hearing the name don Juan in cartoons and on "I Love Lucy" when I was young. I knew the name was used for some very romantic dude, and I seriously thought his first name was Don and his last name was Juan. I'm sure this is a common misunderstanding among gringas. Actually, the word don is a respectful term, sort of like mister and formally translated as esquire. In El Salvador, don is still widely used as a term of respect for men, as is doña for women.

Greasy and Grubby could hardly contain themselves from bursting out laughing as they shook hands and greeted Don Juan, "Mucho gusto, don Juan." The two of us, Greasy and Grubby, still laugh out loud when we remember the way in which we first met a real Don Juan, just a nice guy from the neighborhood who happens to be named John.

(The photo of the statue of the legendary don Juan taken in Seville, Spain by Linda)


Culture Tales of Greasy and Grubby