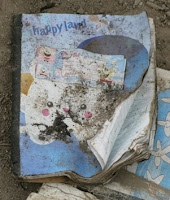 Homework in a happyland notebook, now lost and dirty.

The homework papers in the dirt troubled me so greatly. I wanted to pick the papers up, look for names, take the work to the teachers. I did not want to see lost homework, lost learning, lost time, or the horrific evidence of a lost child.

Three months after a wall of water and mud and boulders rushed in during the middle of the night, the neighborhood of San Antonio in San Vicente still bears the scars of life interrupted and life lost. The town will not be rebuilt. The people are scattered among nearby communities, among family, among shelters. Some survivors se

em lost among the ruins where they search, sit, grieve, remember, honor and tell. In telling there is healing. Our Salvadoran Lutheran Church pastor friends know this, and as part of the psycho-social care they give to the community, they bring people like us to be witnesses and to be listeners. 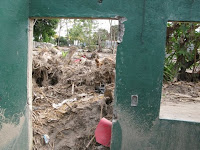 was sitting nearby when we walked into the green house. It was hard to understand his story because he was crying his way through it. Under the pile of dirt behind this house, he said, a 4 -year old was lost and they haven't found her. Over there the 2 children lost their parents. Each remnant of a home, to him, is the memory of a neighbor family. It's hard to believe that they are lost or buried - gone.

José offered to take us to his house. His home was a lavender shell. He told us that when he heard the water coming, he grabbed two of his children and yelled, "Wake up! Wake up!" He held onto them and held onto the porch post when the water came rushing. "God save us! Mary save us! Jesus save us!" he and his children cried out. His wife and another child (I think) were washed away, but luckily, he learned later, that they washed into the second story of a house down the street. They prayed and God saved them.

José said that we were standing at the site of a miracle. He pointed and told us to look up at the palm tree - the only tree there - the site of a miracle. The woman across the street was in a wheel chair. She was sitting in her chair when the water came. She prayed out loud, "God save me! Mother Mary save me! Lord Jesus save me!" God heard her prayers and when the water came, he picked up her chair and placed it way up high in the branches of that palm tree. That is where the rescuers found her, sitting right in her chair up in that tree. She was not hurt at all. She prayed, God heard her and God saved her. It was a miracle!

Amidst so much death, so much suffering, so much grief, the final word is miracle. José draws strength from the miracles which God worked in the midst of a flood. As José shares his story with us, we are called to share his burden of pain and grief and death, and to receive from him his testimony of faith. 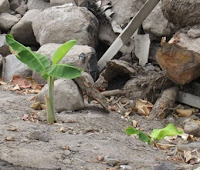